Why you cheering for that white girl?

This Friday morning in Vietnam, I’m watching history in the making. On a warm Thursday evening in New York City, four American women fill the draw at the US Open tennis tournament semifinals.

Three of them are black. And only one of them is a Williams sister.

Venus and Serena Williams have dominated American women’s tennis for more than a decade, turning themselves and their families into sporting and fashion icons. While I am rooting for Venus today, in the past I’ve had trouble cheering for her sister Serena.

Given my background growing up in the black neighborhood of Kenilworth in Washington, DC, and with my white family’s life tied more than most to the African American experience, I’ve felt bad about this.

Serena would be playing, and I’d be rooting for her opponent. And then some voice from out of Kenilworth would pop into my head. “Why you cheering for that white girl?”

I think I had trouble cheering for Serena because of her dominance, her in-your-face aggressive style. I’m often more for the underdog, the come-from-behind athlete quietly calming the inner demons to succeed.

But it might have been partly about race, too. I grew up in a country where race matters, and my experiences living in a black ‘hood only accentuated that. It’s possible that I transferred negative feelings from a few instances of aggression toward me by people with black skin onto my experience of watching Serena the tennis professional. I hope not, but negative racial stereotypes are insidious.

Racism ain’t pretty, and it tends to get everywhere.

There’s always opportunities for positive growth, however, and this moment – when three out of the last four women in the US Open are African American – feels like a sporting and cultural opening.

As black Americans become more prominent and successful in many different areas of our culture, it’s a welcome sign that centuries of racist treatment of blacks is in some ways being reversed.

There’s a danger, however, in overstating the progress represented by such front-page successes. It might lead some to mask or overlook the problems that still lie behind the success.

Perhaps this is the mistake made when Obama was elected president. “Well,” the thought went, “because we now have a black man at the head of our government, as presumably the most powerful person in the world, racism must be dead.” Recent events in the United States have made it clear this is not the case.

On her side of the US Open semifinal draw, Venus Williams is playing Sloane Stephens. Here’s a Washington Post article quote from Sloane Stephens’ mom, about having three black women contesting the penultimate matches this year:

“I… look at them as individual, exceptional players, without the asterisk of saying ‘African American,’ because that’s really what they want to be known as — as athletes, not ‘African American athletes.’ And so I think any win they have should be a win because of their merit.”

Part of racism is lumping people together by outward characteristics. And so I agree that, as much as we can see each of these three African American women as individual competitors with varied histories, then we are also fighting our natural impulse toward racial stereotyping.

And when American culture gets to the point that a black person wins the US Open and all the talk is about athleticism and grit, and no one needs to mention how wonderful it is that an African American won, then we might start saying we are growing beyond race.

For my part, I’ve learned to appreciate Serena more in the last few years as her confident, aggressive brand of tennis took center stage and Venus faded a little to the background. I’m happy to see Venus in the limelight again, however, and really hoped she would make it into the final.

She didn’t, but there’s still two African Americans – Sloane Stephens and Madison Keys – in the finals of the US Open. On Saturday – well, Sunday here – I’ll be cheering for a black woman playing against a black woman. That’s something to celebrate.

And the voice in my head from out of Kenilworth will be celebrating, too.

Pretty much all my life I've admired my parents' choice to leave behind their white, rural upbringing and settle — for much of their adult lives — in a black neighborhood in Washington, DC. With their words and with their actions they taught me the importance of reaching out across cultures and working to make positive change in the world.

In the aftermath of the fall 2016 US presidential election, I've been pondering their legacy. I think about how much money and time gets put into politics in our country. I think about how much good my parents were able to do, completely outside of politics and with very little money, by intentionally making a cross-cultural move to a low-income, urban neighborhood. And then I wonder, are political investments the best way to bring change?

Politics is necessary — a necessary evil, some might say — since any society needs a governing structure to function. But there are some things government is ill suited to do, and bridging racial and cultural divides is one of those things our country's bureaucracy does not do all that well.

Mending the fractures caused by unequal treatment based on race requires hard, messy, on-the-ground work, and that's the kind of work Elmer and Fannie Lapp, my parents, did in the Kenilworth neighborhood. Living at the edge of the most politically powerful city in the world, they ignored the political system and still somehow — little by little and with many missteps — brought love, peace, and hope to many in a community that had very little access to power.

The July 2017 edition of The Mennonite magazine contains an opinion essay that I wrote with more thoughts on how my parents made change outside of politics. Unfortunately, the editors took out my favorite sentence, which appeared toward the end and commanded readers to "make change with casseroles." (Smile) And they didn't post an online version of the article. But you can easily read a pdf of it by clicking on the image below.

Many thanks to Steve Carpenter for the scan of the article, as my copy of the magazine hasn't yet reached me in Hanoi!
Posted by Joe Lapp at 12:37 AM 1 comment:

My ginger-haired one year old gets a lot of attention on the streets of Accra, his present home city.  For one, since our family doesn't own a stroller he's usually walking, while most Ghanaian babies his age ride wrapped onto their mama's back.  For another, he's got that red hair.

And of course, he's white.  White people comprise a definite minority here, and when walking even more so - whites tend to be of the wealthier set who take mostly to cars.

My boy also gets attention because he gives it; his favorite thing to do when out and about is to wave at everyone he sees.  Most wave back.  Some pause for a high five.

On a recent walk, my kid's friendliness so inspired one man he stopped to talk.  He had something he wanted to get across to us, and through a thick accent and English a mite garbled, we got most of it.

"We blacks," he said, "we blacks, we teach our kids to discriminate."  My wife and I are divided about whether he was saying that Ghanaians (in his opinion of course) teach their kids to discriminate against whites or between families/ethnic groups.  But his central message, as he continued to talk with a fair amount of passion, was clear - it's better to teach children to be accepting of and open to everyone.

"It is good," the stranger said of my son's impartial friendliness.  "He will live long."

One year olds, I'm pretty sure, don't see race.  But it might be a lot easier to teach children to discriminate - between things, or against people - than I think.  I do know that, for myself, learning how to 'see' and respond to race has been a lifelong, continuing experience.

"May he live to be 100 years before he is called up," the man said of my son, by way of goodbye.  And I hope he keeps his openness all those livelong years.
Posted by Joe Lapp at 9:26 AM 1 comment:

"Chuck 'em in the middle of Africa, they won't survive long…"

…said the guest on the BBC Radio talk show.  I was driving through Accra traffic and only had the station on for a short snippet, just enough to know the radio folks were talking about how we humans modify our environment to fit our requirements instead of adapting to survive whatever the surroundings.  How we are so fragile without our comforts.

It caught my attention, this reference to 'Africa.'  How the "middle of the continent" was somehow the de facto place on the planet where it would be hardest for us less hardiest of beasts to survive.

I suppose the guest didn't mean his comment to be derisive, but I took it that way.  I'll stop short of saying I was "appalled and disgusted" at the negative stereotyping.  It at least made me sad.

Never mind that the "middle of Africa" isn't a real place.  The continent is too varied - in both shape and culture - to have a middle.

What hit me the most was that there was no qualification of the use of Africa as the prototypical fearsome wilds.  The guest didn't say, "Chuck 'em in a jungle in the middle of Africa…," or "Chuck 'em in the middle of the Sahara…"  He simply assumed the whole place was so inhospitable and disease-ridden, so full of beasts of prey that no human, left to themselves, could survive.  Anywhere.

Now it's very true that there are a lot of wild places in Africa, places that, left to myself, I certainly wouldn't survive in for very long.  But when people talk about the continent's dangerous places I want there to be a specific qualifier, a discrete area, in the conversation.

If you don't know enough about this land to name a specific treacherous place, don't lump the whole shebang into the primeval heap.  (I do love mixed cliches.)

I recently walked through an example of survival here in the West African country of Ghana.  A kind of basic adaptability that the dude who said "chuck 'em in Africa…" probably wouldn't be able to pull off himself.

The used clothing market in Accra Central burned down barely a month ago.  But when I went through there last week, the place was already back to functionality.  In place of the wooden stalls with their corrugated tin roofs I saw a sea of umbrellas sheltering the traders, their goods piled on pallets to keep them off the mud.

Now that's a place I'd like to see the BBC commentator chucked.  See how long he'd survive. 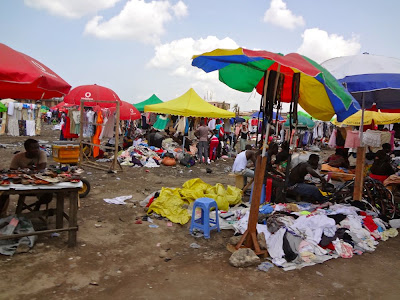 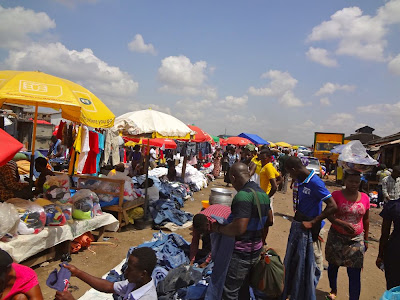 Email ThisBlogThis!Share to TwitterShare to FacebookShare to Pinterest
Home
Subscribe to: Posts (Atom)
I was born an Amish-Mennonite whiteboy. I grew up between the 'hood in Washington DC (the small city) and rural Amish country in Pennsylvania. As an adult I've lived abroad in both Africa and Asia, and I'm currently working on a memoir about my family's cross-cultural journey. This blog is occasional thoughts on race and culture from the perspective of an Amish Mennonite whiteboy who grew up in the 'hood.